A gathering area of Tujia People and Miao People

Wulong scenic spot is located on the border between Sichuan and Guizhou, which once belonged to Ba state. It is a gathering place of Tujia and Miao People. 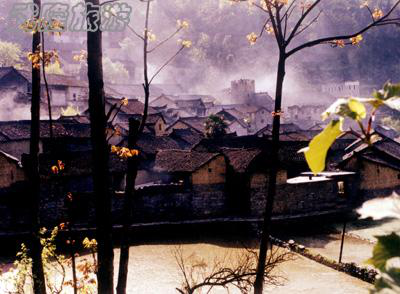 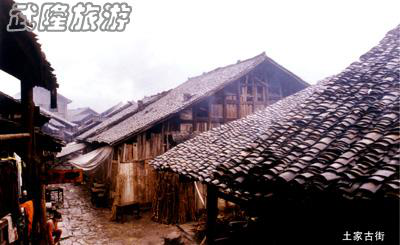 An ancient street of Tujia People

Traditionally, Tujia women wear jackets trimmed with lace and with short, broad sleeves. They wear long skirts, and wrap their coiled hair in cloth. They adorn themselves with necklaces, earrings, bracelets and ankle bracelets. Tujia men wear short jackets with many buttons in front. The traditional hand-woven "xi" and "tong" cloth with intricate designs are the main material for clothing. In pre-1949 times, the gentry wore furs in winter, while the poor peasants wore thin garments and were cold.

The Tujias are well-known for a hand dance with over 70 ritual gestures to indicate war, hunting, farming and feasting. The dance is popular at Spring Festival, the Lunar New Year, when several thousand people participate. Tujia epics, which are imaginative, tell of the origins of mankind and of the migrations and aspirations of the Tujias in dramatic and poetic ways. Tujia folksongs are usually about love and work, battles and grief. Virtually all Tujias can compose and sing songs. 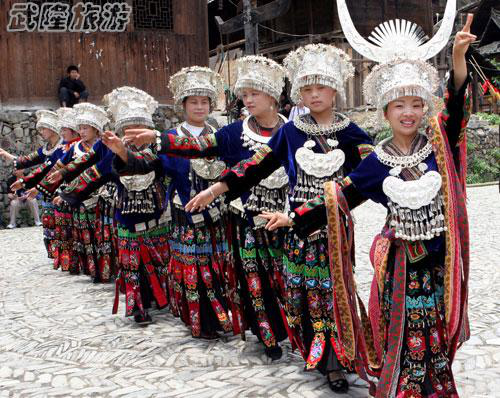 Throughout Chinese history, the term “Miao” has been applied inconsistently to a variety of non-Han peoples, often with the connotation of "barbarian." The term "Miao" gained official status in 1949 as a minzu (nationality) encompassing a group of linguistically related ethnic minorities in southwest China. This was part of a larger effort by the Peoples’ Republic of China to identify and classify minority groups in order to clarify their role in national government, including the establishment of areas of autonomous government and the allocation of seats for representatives in provincial and national government

Much of the Miao area is hilly or mountainous, and is drained by several big rivers. The weather is mild with a generous rainfall, and the area is rich in natural resources. Major crops include paddy rice, maize, potatoes, Chinese sorghum, beans, rape, peanuts, tobacco, ramie, sugar cane, cotton, oil-tea camellia and tung tree.

The clothing of the Miao ethnic group has distinctive features which vary from place to place. Men’s clothes are similar. They wear short jackets buttoned down the front, long trousers with wide belts and long black scarves. However, women’s clothes are totally different. They wear high-collared short jackets and full or half-length pleated skirts. They also wear various kinds of silver jewelry on festive occasions.

Miao people all love singing songs. There are eighteen rules in singing in antiphonal style. These are Miao's rules for singing in antiphonal style. If someone breaks the rules, he or she will be driven out of the singing spot. In the wedding, praising songs will be sung and so will historical stories, legends, astronomy and geology. After the older people go away, the young may sing love songs which have to be implicit. At parting, parting songs will be sung. When lads and lasses sing in antiphonal style, though falling in love, lads are not allowed to give keepsakes to lasses in public. At wedding feast, no riddle song is sung because a riddle song will cause quarrels, and damage the happy atmosphere. Singing in antiphonal style, young men are forbidden to invite married women or engaged girls. If they make a wrong choice, the females will refuse the invitation and return the keepsakes sent by the men. On the way meeting with this singing, you should take past in it. If you are in a hurry, you should sing to show apology.