Abstract： The clear, loud and melodious sound of suona--- 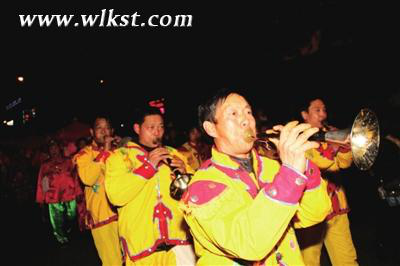 Suona can add festiveness to festivals 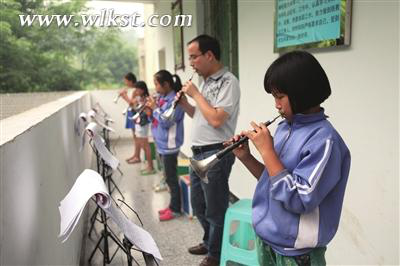 The clear, loud and melodious sound of suona--- “doo, la, doo, la, la…”can surely remind many people of sweet memories and illusions. Suona left a deep impression on people who lived before 1980s. When there are happy events, the music instrument suona is a must. Nowadays, with the development of society, suona is replaced by modern band and disappears gradually.

Suona is a Han Chinese shawm. It has a distinctively loud and high-pitched sound, and is used frequently in Chinese traditional music ensembles, particularly those that perform outdoors. It is an important instrument in the folk music of China. It is still used, in combination with sheng mouth organs, gongs, drums and sometimes other instruments, in wedding and funeral ceremonies. Such wind and percussion ensembles are called chuida or guchui. In Taiwan, it forms an essential element of ritual music that accompanies Daoist  performances of both the living and the dead, so does in Wulong.

Suona culture inheritance in the countryside of Wulong

Li Zicheng, a 70-year-old villager who lives in Longdong village in Huangying township, is a well-known suona player far and near Wulong. He was deeply influenced by seniors who always played suona, he was interested in playing suona and became highly skilled. He frequently played suona everywhere in Wulong, for example, Xiangkou Town, Huolu Town, Baima Town and every scenic spots.

Aspects of social life in Wulong people's life, death, marriage, entertainment and entertain the people of God and others have an indispensable link. Its use can be divided into: a festive suona. Suona mainly used for moon festive birthday, long life celebration, marriage rituals, holiday entertainment, the opening ceremony and other occasions. And suona in sacrifice ceremony and funerals. In recent years, the suona playing and dance and other art are combined by artists and they have composed the suona theatrical choreography, performed on stage.

In Wulong and surrounding rural areas, traditional etiquette with their strong local characteristics are kept in wedding and funeral ceremonies. As Li Zicheng said, every aspect of etiquette has a generally fixed musical score, which reflects the practical musical function of playing music to express etiquette. For example, to bless the newlyweds or pay homage to the dead, the music used has its own characteristics in terms of tone, rotation, speed, and so on. In wedding, it prefers to use the mode of requisition-style, but in funeral, Gong Diao tunes is often used. The music played in wedding ceremony usually shows a downward-core tone and variant of a high tone re to the middle tone sol, and the funeral ceremony usually uses the middle tone la and the high tone do with the extension as the introduction. Furthermore, in order to end the performance directly in accordance with the length of etiquette value, a fixed ending note is flexibly used in ceremony in most of the time. Wulong suona is an indispensable part in local wedding and funeral ceremonies, and vice versa, the wedding and funeral ceremonies also provide a stable carrier for the inheritance and development of Wulong suona.